Bacteria can do it for you

What is contamination? Have you ever thought about it? Because it’s not an easy concept to define. There’s no doubt that we have changed the planet environment with our actions, but which of this actions can be considered contaminating? Can nature contaminate also? One of the examples I like the most for describing this tricky issue is the cataclysmic oxygen “contamination” produced by photosynthetic organisms 2.400 million years ago, that changed the world radically. Before this event there was no free oxygen in the atmosphere. But not being easy to define don’t make the problem disappear.

It seems that nature’s tendency is creating cycles and balance. Equilibria that (human or natural) actions and exceptional events tend to disturb. Thus, I think contamination can be defined like a change in an established equilibrium that may incapacitate this environment for further desired uses, like containing life or being drinkable, for example, if we regard some of the water features. I can’t think about nothing more stylish that return to that first state using a biological tool.

Of course, you don’t win style points when you talk about solving a real problem, but think for a moment about nature’s capability for returning constantly to some kind of natural balance. The problem is that, sometimes, this can take years, decades, or even millennia (radioactive contamination). Imagine if we could speed things a bit…or a lot.

In this line of though we find bioremediation: an elegant solution that use biological elements in order to solve a contamination event.

TNT (trinitrotoluene) and other explosives have been extensively produced along the 20th century. With two world wars and a multitude of armed conflicts, this century leaves a lot of industrial effort creating weapons. But not all of them were used (thankfully), and a lot are still stored or have contaminated the soils all around our planet. When an ammunition silo gets abandoned, the rain water starts to lixiviate the explosive into the soil and contamination is evident. But cleaning a warehouse in this state, with active ammunition inside, is treacherous and uneasy. So the problem get worse every year, until the contamination reachs the groundwater and disseminate the problem. 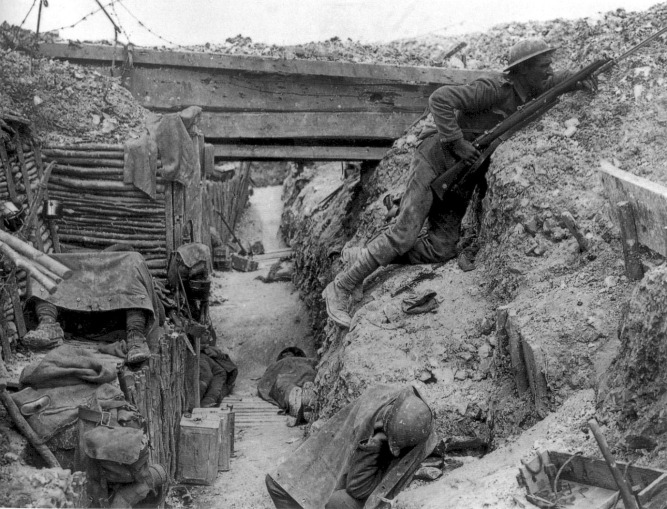 WWI. Artillery bombardment over the enemy trenches before the attack was a principle of behavior through the war

WWI. Canary girls in UK. The nickname was due to their orange-yellow skin coloration after TNT constant intoxication

TNT and nitrobenzene derivatives (NBDs) are mutagens and potencial carcinogenic compounds that can cause anemia, changes in the skin’s color, headache, nausea, weakness, dizziness, etc, under continued exposure. Have I said  that this compounds are toxic already?. Conversion of TNT to TAT (triaminetoluene) can help decreasing the toxicity, since reducing the elecrophilic character of the aromatic ring seems like a requirement for the dioxygenases (enzymes) to attack and degrade the compound. Wait, what? Ok, the same that saying: degrading this compound to TAT help the microorganisms and plants to absorb it using their natural mechanisms. This is important because some of the available “biotools” just make this first step.

Several conventional physic and chemical treatments have been proposed for the complete water and soil decontamination. Like ex situ incineration of this soil, which is very effective but very expensive also.

As I have said, some of them only degrade TNT to TAT, which is a first step. Others like specific strains of Pseudomonas sp are reported to completely mineralize the compound. Yes, it’s not only about finding the right species, because some strains of the same species degrade the contaminant, while others don’t endure in the same conditions. This leads to the selection of specific strains of specific species after a lot of work and investigation.

Indeed, some patents have been registered, like the Simplot Anaerobic Bioremediation (SABRE), or Daramend Reagent developed by Peroxichem. The Simplot solution, which was in fact developed by a multiple organization effort, is based for example in a combination of Clostridium strains; a gram-positive bacteria better known for causing botulism. But this little guys are here to save the day, so don’t worry.

But bacteria aren’t the only ones that deserve a mention in bioremediation of DNBs! Fungus like Phanerochaete chrysosporium and plants like the chufa nutsedge, the switchgrass, or plants of the Leguminoseae family are honorable candidates also.

And a quite obvious conclusion comes to my mind: what if we use a combination of all this organisms? It’s like the kiddish area of your mind asking about mixing everything up just to see what happens.

The problem about this all-in-one focus is that the more complex the system, the less you control it. If you don’t know how a system works nothing guarantee it’s going to work the next time you do it in a different place/situation. BUT there are exceptional and also fresh news about this: watch this video please.

Transgenic, you hear it right. BBSRC don’t give many details for now (we can imagine why) but it seems that they have incorporated the enzyme responsible of the bacterial activities in the plant modifying it’s DNA. That take me again to the first post of this series, transgenic plants: green devils or light beings? Is it right using this technology in any case, only for bioremediation or similar practices, or should it be banned completely? Please, let me know what you think and comment below. See you soon!